Happy New year to all you mycophiles out there….I know it is a bit late but Christmas was busy, as usual, with much eating and drinking and celebrating and travel.  Also, as is usual at that time of year, there was the dreaded cold/flu that always strikes when people gather in warm cozy places.

We both got the plague and were laid up for a couple of weeks. Then the kitchen reno began with the need to pack up the kitchen and move some of the the contents down into the suite, clear out the cupboards, move out furniture…blah, blah blah.

When that was done we hopped on a plane and flew to Kauai for two weeks….ah I know it is a tough job, sitting in the sun, drinking beer, eating warm spam sushi or better known as musubi in the islands.  This is a local delicacy enjoyed by most of the locals as a quick lunch or morning snack.

You take sushi rice, pressed into a rectangle about 1.5 inches by 1.5 inches by 3 inches, cover the surface with a teriyaki kind of sauce, place a piece of fried spam on top of the sauce then wrap it all with a piece of nori….serve hot….I tell you if you are in any way a spam lover, you must try these. They are addictive!!!

The locals just love spam and to show you how much….this is a picture I took in the local suppa market of the varieties of spam available.

I bit off topic from my usual posts, but eating is one of my favorite hobbies, and when I travel I love to try local foods….most times the experience is amazing, sometimes not so much.

By way of example, the first time we traveled to Europe in 1999, we spent 5 glorious days in Paris, enjoying the  sites the sounds the wine the food. For the most part we ate in local bistros and the food was marvelous.  I had the best omelet I ever tasted and have been able to master the technique at home.

One day we were walking past a little cafe at about lunch time.  In the window was the menu dejure…..one choice was Andouille Sausage ….I had heard about this sausage and read about it in recipes, so I decided to try it.

There are likely as many recipes for this type of sausage as there are for any kind.  My experience of this sausage was to say, it was the worst tasting food I had ever had then and to date.  It was basically pig intestine stuffed with pig intestine…chitlins to some. I know  that sausages are usually where thrifty butchers take less desirable bits and pieces of the animal, grind them, seasoned and stuffed them onto intestines, what some call “tubes of mystery meat”. I know that and generally love the creatively of many cultures in utilizing everything but the oink in the pig. This tasted horrible!!!!! It tasted like sh*t…..litereally…someone had done a poor job of cleaning the “casings”.  I didn’t eat much of the Andouille after the first bite, and didn’t get sick.  To this day I have not tasted Andouille again.

Back on track, when we visit the Islands, I am always hoping to find some interesting members of the fungi family. Each year we usually spot a couple of examples,but they don’t seem to have the diversity we do.  I think that with the local  attempt to eradicate alien plant species from the islands, they use chemical sprays, which I believe kills everything, even their own people.

We heard on the radio of how several grounds workers were poisoned as a result of cutting grass on a field that had recently been sprayed.  No one was suppose to have been allowed on the field for a minimum of 24 hours. Someone failed to post that warning.

We also took in a tour of one of the old sugar cane plantations that no longer produced sugar but grew other fruits, vegetables and raised live stock.  What surprised me the most was that 9 out of 10 of the plant and tree species that were growing on the plantation were not native to the islands. As our guide told us, the local plants were just not as aggressive as the alien species were in competing for space.

This year we attempted to hike the trail on the Giant on Kauai.  On the g hike  we spotted some fungi growing on some dead wood. It was a polypore, bright orange-red, the colour of the volcanic soil. 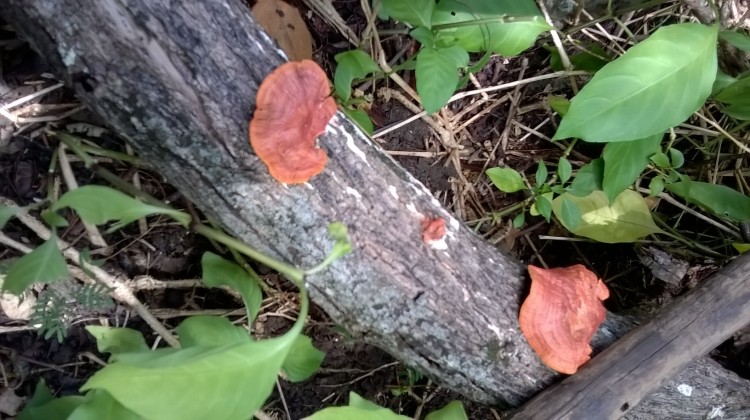 I went on-line and found an article by Daniel Winkler who had photographed and  identified it as Pycnoporus sanguines or Red polypore. It was our only sighting.

I am home now on the much cooler west coast and glad to have visited the Islands but also very glad to be back to the more temperate yet just as lush jungles we have here.

Today, February 9th, while out doing a bit of forest bathing I spied a couple of our many local fungi species….

Here we have an example of White coral…likely Clavulina cristata

And some beautiful LBMs, little brown mushrooms that may be a Mycena or Panaeolus…

Finally, here is an example of the false Oyster or Panellus mitis 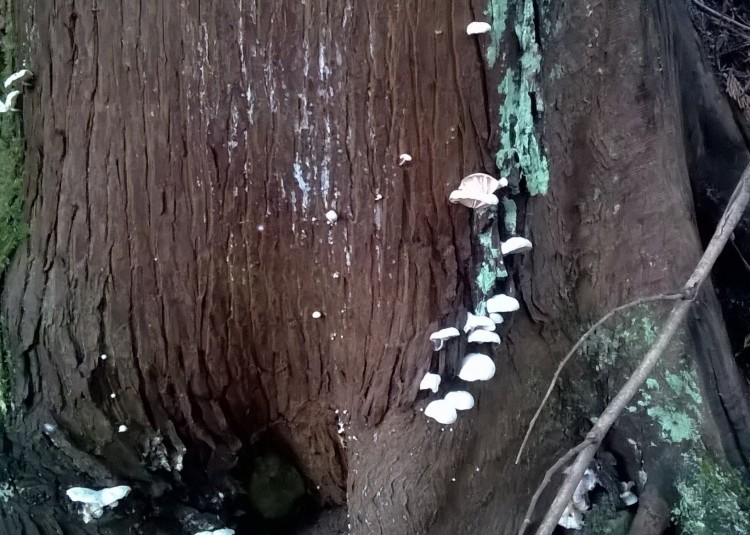 Spring is on it’s way, and that means that morels will be popping up their heads soon….lets be hopeful for a bounty this year after the terrible fire in West Sechelt last summer.

Hope to see you on the trails sometimes…coastalschroomer.